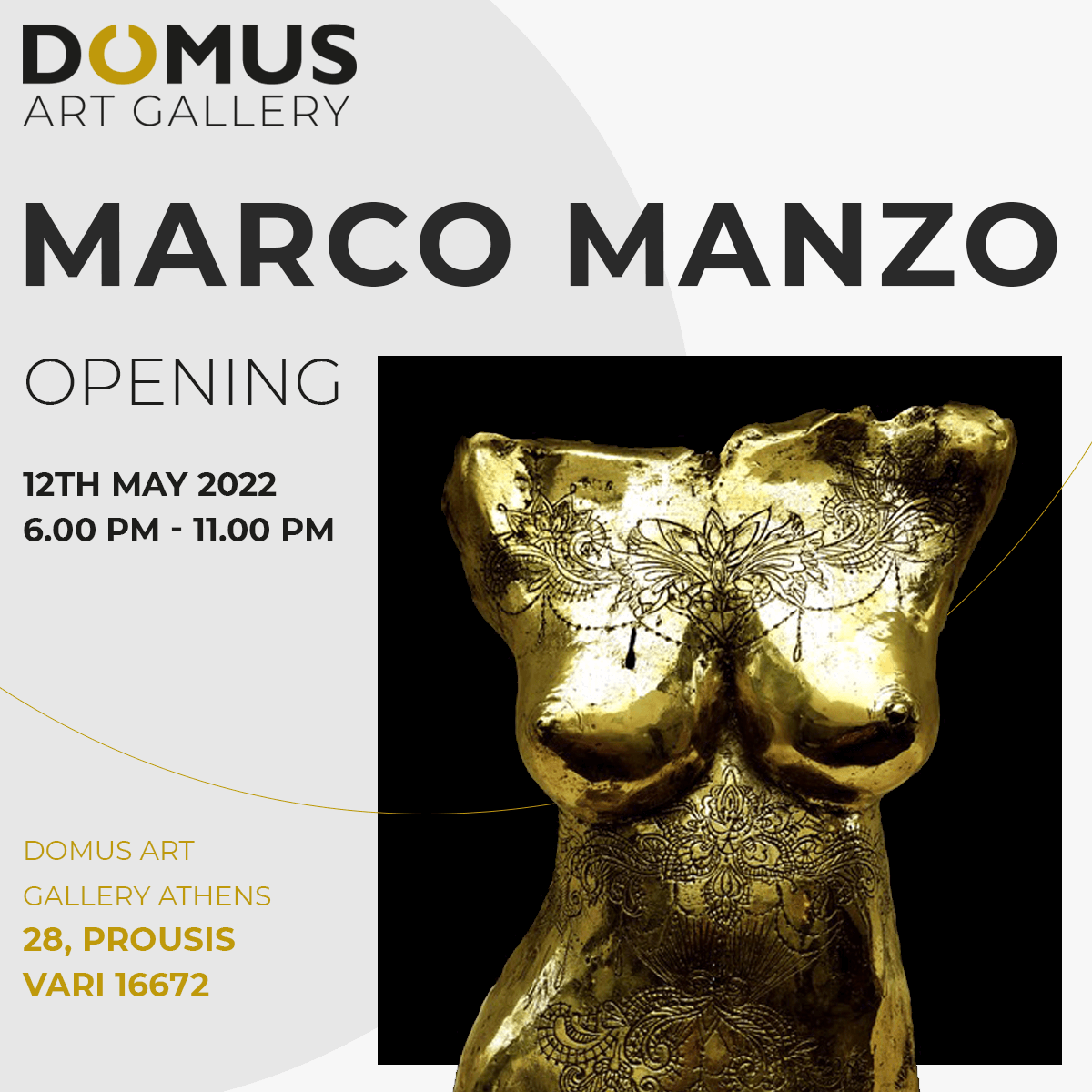 DOMUS ART GALLERY proudly presents the exhibition ‘Marco Manzo’, comprising works of the acclaimed tattoo artist and contemporary artist from Rome, Italy. The exhibition will be inaugurated on May 12 (18.00-23.00).

The line between tattoo art and art, is often a fine one, and Marco Manzo not only has crossed it, but has also created a bridge between these two neighbouring vessels, which has helped enrich them both.  Manzo is one of the greatest tattoo artists world-wide, but he is also an acclaimed contemporary artist. He will be visiting Athens on May 12, in order to inaugurate his art show entitled ‘Marco Manzo’, at the Domus Art Gallery. As a tattoo artist, Manzo is the pioneer of the ornamental style tattoo, ‘Tattoo d’haute couture’, but also expert of the tribal and 3D style. He managed to introduce the tattoo as an art form in the ever-expanding world of contemporary art. As a contemporary artist, he creates sculptures of the human form made from casts taken from real bodies (including that of actress Asia Argento), engraving upon them intricate designs. A fluorescent coloured series of his ‘Asia’ busts will be included in the exhibition in Athens. Also on show will be works which entail his ingenious marriage of the x-ray photo and the tattoo.

Manzo has exhibited his work in various ways, in prestigious museums and galleries, such as New York’s Museum of Modern Art (MoMA) and Gagosian gallery, or the MAXXI and the Vittoriano in Rome, but also at the Venice Biennale of Architecture, and the Venice Biennale of Art, invited by the curators of the Guatemala Pavilion. The inauguration of his art show in Athens promises to be a unique cultural happening, seeing as Manzo’s tattooed models (the living, breathing variety), will also be giving a performance.

As the contemporary art world broadens its horizons, by acknowledging and incorporating into its definition of art more and more techniques, styles, methods, mediums and practices, bridges are formed between art and other, neighbouring vessels. Such is the case with tattoo art. Via these bridges, we also realise, that some things stay the same: Art has always been inspired by the human body. Take the ancient cultures of Rome and Athens for example, and the beautiful sculptures of the human form that were created back then. Carved out of marble, these sculptures both studied and idealized the body.

Marco Manzo’s sculptures bring to mind the ancient artefacts of Rome and Greece. They have been made from casts that have been taken from parts of the human body, and so, they are ‘fragments’ of the body, the same way that we see fragments of the body in archaeological findings. Let us also consider that many of these ancient artefacts which we see today as being mostly of pure white marble, were once not only adored, but also adorned (with colour). Traces of colour have allowed archaeologists to understand how they were originally decorated. With this in mind, Manzo’s adorned fragments of the human form, connect even further with the ancient forms of classical Greece and Rome.

However, the designs which Manzo has embellished his sculptures with, are pure contemporaneity in their pluralistic and eclectic logic: These ornamental patterns hark back to Venetian lace, Victorian jewellery, Egyptian wall paintings, ancient engravings, Indian mandalas, grandiose chandeliers and tribal dot work among other things. All continents have been united, via the multicultural inspiration behind these elaborate designs that have been engraved onto the sculptures.

Marco Manzo is an all-round artist: tattoo artist, designer, contemporary artist. In 2015, a double goal was achieved at the MAXXI museum in Rome: as part of Alta Moda Roma, Manzo took the art of tattoo to new heights, gaining its acceptance in the field of fashion’s Haute Couture as a new symbol of elegance and refinement. At the same time, the museum also accepted the tattoo as an expression of art. That same year, as a designer, Manzo collaborated with BMW, creating for them a special design (the NINE T-Tattoo) for the 90th anniversary of the NINE T motorcycle. At the Benucci Gallery, Manzo’s creativity was presented alongside that of famed artists such as Guido Reni, Tiepolo, De Chirico, Balla, Mitoraj, Fontana and others. This enabled Manzo to open a dialogue with more art institutions and to create further collaborations, such as with Rome’s MACRO Museum of Contemporary Art, which assigned him the realization of a large international exhibition entitled “Tattoo Forever”, which also featured some of his works. For this event, actress Asia Argento (Manzo’s muse and friend, who has been tattooed by Manzo and from whose bust Manzo has created casts for his works), realized a unique performance on a swing.

Manzo has won over 75 national and international awards. All the more art museums are including his work in their collections. When he exhibited at the Limen museum in Vibo Valentia, his work was awarded for its unique artistic value, and is now part of the Vibo Chamber of Commerce Museum. At the Rocca Flea Civic Museum of Gualdo Tadino, his work won the accolades of its director Catia Monacelli, who declared that “The tattoo, alongside the so-called major arts, rightfully enters the sacred temple of art”.

At Rome’s Vittoriano Museum, Manzo’s ceramic busts and his entire artistic production have been exhibited in conjunction with the exhibitions of Warhol and Pollock. It is here that Manzo also presented his tattoo manifesto. Manzo’s work then travelled to the 16th Venice Architecture Biennale (2018) and then to the 58th Venice Biennale of Art (2019). At the former his installation explored the art of tattoo and sculpture, linking the archaic with the contemporary. At the latter he exhibited “The Wall of Silence” at the Guatemala Pavilion – a work against violence on women and femicide.

At the Guatemala Pavilion of the 16th Venice Biennale of Architecture, Manzo’s ‘Sheets’ installation, comprising of 47 “tattooed” x-ray plates which could be viewed on a backlit panel, allowed for several billions of possible combinations. Curator Daniele Radini Tedeschi wrote about this work: “the visitor, by placing one of the different plates at his disposal on the monitor will be able to observe the tattoos imprinted on the bones, a sort of genetic ‘identity card’ albeit ephemeral in the light of the decomposition of mankind”. One of Manzo’s busts also later featured in the performance ART4ART with painter Daniele Bongiovanni.

In a piece entitled ‘Il Corpo Glorioso’, acclaimed art critic Achille Bonito Oliva has written about tattoo art, tying it with the tradition of body art.

Manzo has said about his own art that the aim is to eternalize his mark, which when executed on the human body (as a tattoo), is by its nature mortal. However, when made on a sculpture, becomes immortal and imperishable. In his manifesto, Manzo analyses why he has chosen to separate the word ‘ornamental’ in two, in order to create the term ‘orna-mental’: ‘Orna’ stands for the ornate style of tattoo that he is known for, while ‘mental’ is about the art form: “The word leads us to ‘thought, to reflection and therefore to the elaboration and re-elaboration of a tradition or even better of a body of traditions and knowledge that history has given to us through paintings, architecture and art”.

Tattoo art is an ancient tradition, that dates back to the Incas, and the ancient Egyptians. In 1991, the tattooed ‘Iceman’ discovered on the Italian-Austrian border, was estimated to have lived 5,200 years ago. The art of tattoo can be perceived as a “symbolic rebirth of the body through art” as Manzo describes it in his manifesto. For Manzo the tattoo artist, the living, breathing body is his blank canvas. A tattooed body, is a moving sculpture. However, as Manzo also states in his manifesto: “It can be stated that the art work of tattooing is ephemeral compared to a painting or a marble or bronze sculpture.”  For Manzo the contemporary artist, the immortalization of the human body is achieved through his sculptural works. They have been born out of his art practice as a tattoo artist, and they are here to stay!

Thursday May 12 (2022) from 6-11pm. Entrance to the exhibition is strictly in accordance with the government’s anti-Covid19 security measures.

Visiting hours after May 12:

Manage Cookie Consent
To provide the best experiences, we use technologies like cookies to store and/or access device information. Consenting to these technologies will allow us to process data such as browsing behavior or unique IDs on this site. Not consenting or withdrawing consent, may adversely affect certain features and functions.
Manage options Manage services Manage vendors Read more about these purposes
View preferences
{title} {title} {title}